skip to main | skip to sidebar

Are You Sage? Getting an Edge in Heads-Up No-Limit Hold'em

A poker tournament is often as much about mental endurance and discipline as it is about the cards and strategy. After all, particularly in no-limit hold'em, a single error can put you on the sidelines, even after playing flawlessly - or brilliantly - up to that point. 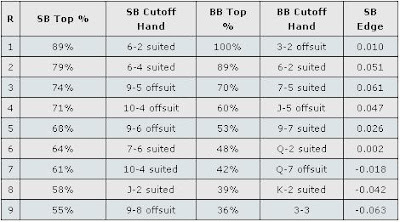 Here's how to interpret the above table:

• The "SB Top %" is the percentage of your hands that you should jam with in the small blind, given that value of R.

• "SB Cutoff Hand" is the worst hand that meets that criterion. Of course, for this to be any good to you, you have to know the ranking of all 169 starting hands. SAGE makes it unnecessary to know this list.

• "BB Top %" is the percentage of your hands that you should call with, if the SB jams.

• "BB Cutoff Hand" is, again, the worst hand that you should call with, if the SB jams.

• "SB Edge" is the amount that the SB can expect to win, in "big blind" units, for that value of R, if both players follow this system. Note that when R is 7 or greater, the SB has a slight negative expectation if he employs only the jam-or-fold strategy. If R is this high and you're the SB, you should "play good poker" (that is, mix up limping, minimum raising, and jamming). However, if you think your opponent is substantially better than you, you can simply play the equilibrium strategy, secure in the knowledge that you're giving up only a microscopic edge.

Now, if you had a list of all 169 starting hands, you could just find your hand in that list and see if it's above or below the threshold in the table above. While this is straightforward for a computer to do, it's not the sort of thing that most of us could do in a live tournament. The SAGE System simplifies the entire process into two easy steps. As promised, you can keep it on a 3"- by- 5" card with you if you're playing online, and can quickly memorize it for brick-and-mortar casino use.

2. Take the power number for your higher card and double it.

3. Add the power number of your lower card.

1. Compute the ratio (R) of the shortest stack to the big blind.

2. Look up the necessary PI for that value of R.

There's one important thing to learn from this: Heads-up no-limit hold'em is not rocket science when the blinds are high compared to one of the stacks. Note that suitedness counts for almost nothing, and connectedness counts for less. We suspect that you will now agree with us that most players grossly underestimate the need to jam early and often. For that reason, you will often have a dramatic advantage over your opponents when using this system.

This information is correct, and provably so. Yet, even Dan Harrington got one of his examples wrong. On Page 409 of Harrington on Hold'em, Volume II, he describes a scenario in which you are in the big blind with Q-7 offsuit. The blinds are $3,000-$6,000 with a $300 ante, and this is the second hand of the heads-up finale of a tournament. Your opponent has $35,400 and you have $144,600. Your opponent, on the button, jams; what should you do? Dan goes into quite a bit of discussion about why this is a close decision. With SAGE, you simply compute the power index for your hand and the current value of R:

Last question: Why are we giving this away? First, because it advances the game of poker. No discipline (including a game) can grow and thrive unless its disciples discuss, argue, prove, and disprove. Second, we don't see why just a select few people should have this information. You can bet your entire bankroll that Chris Ferguson and many others have it. Now, you do, too. *

We are indebted to Mike Maurer for his review and critique of this system.Please note that the SAGE System is Copyright © 2005 by James Kittock and Lee Jones, and the terms SAGE System and "Are you SAGE?" are trademarks. You have our permission (indeed, our encouragement) to use it. But you can't take credit for it and you can't sell it.Lee Jones is the author of the best-selling book Winning Low Limit Hold'em, and is the cardroom manager for PokerStars.com. James Kittock is a math teacher at Mission College in Santa Clara, California, and a serious low-limit hold'em player

Friends and Players on the scene